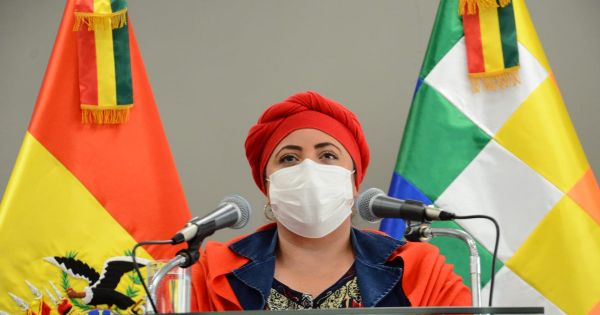 Bolivian Presidential Minister María Nela Prada announced on Thursday that the government had decided to withdraw the bill against the legitimation of illicit profits in order to avoid further confrontations between her fellow citizens, following national protests against the initiative earlier this week.

?? After attempts to destabilize the country by certain groups on the basis of disinformation campaigns, it was decided to withdraw the bill against the legitimation of illicit profits, ?? Prada told the media.

She insisted that the decision was taken “so as not to give rise to destabilization, violence and confrontation.”

The opposition saw the announcement as a “triumph” of citizens that the bill against the legitimization of illicit profits, the financing of terrorism and the financing of the proliferation of weapons of mass destruction or unconventional has been canceled. .

MP Carlos Alarcón said the decision was a “hard setback”? for the Government. ?? It is a great triumph of the mobilized people of trade unionists, transporters, miners, professional businessmen and all citizens who expressed their overwhelming rejection of this law which sought to violate the rights and guarantees of Bolivian citizens, ?? he said.

The governor of Santa Cruz, Fernando Camacho, stressed that if the parliamentary debate had taken place on any citizen ?? could be subject to an arbitrary investigation and be deprived of their property. ??

“A NEW TRIUMPH OF THE PEOPLE The mobilized Bolivian people forced the government of Luis Arce to withdraw from the legislative body another authoritarian law of masismo (from the Spanish acronym of the ruling party: MAS – Movement towards socialism).

Former President Jorge Tuto Quiroga said the events were a “resounding failure”? for the MAS. “A resounding failure of the MASiste’s attempt to criminalize informality, to expropriate small properties and to turn our society into ‘snitches’. We don’t feel like a Cuban colony or a Venezuelan dictatorship; we will be a sovereign, free and democratic #Bolivia (sic) “, he declared.

Most sectors of the opposition were upping the stakes with 48 strikes to come if Arce’s government had insisted that this bill pass in Congress.