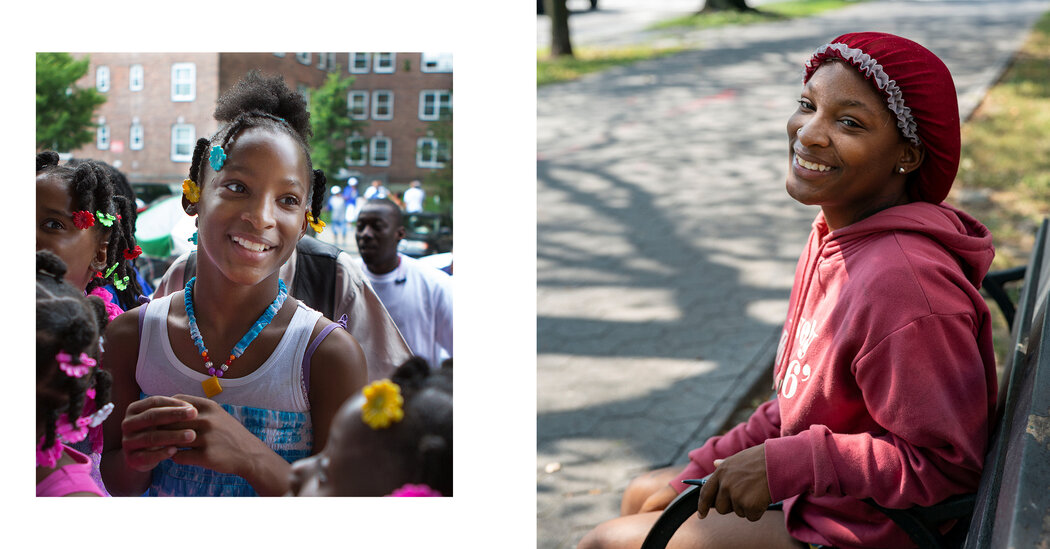 INVISIBLE CHILD
Poverty, survival and hope in an American city
By Andrea Elliott

The best that can be said is that there are 1.38 million homeless schoolchildren in the United States. About one in 12 lives in New York City. Several years ago, readers of this newspaper met an 11-year-old black girl with an unforgettable name: Dasani.

For five consecutive days in December 2013, the New York Times front page focused on a child who lived in the Auburn family residence, a homeless shelter in Brooklyn. She was named after bottled water her mother would never have spent a lot of money on, just as Dasani’s mother Chanel was named for the chic French perfume. Dasani jumped backwards at bus stops and was able to beat the boys in a pull-up contest. At home, she looked after her siblings, changed diapers and made sandwiches, gave the other children the middle pieces of bread, and took the ends for herself. Even his dreaded school principal called him an “early little button” and believed his potential was limitless.

Dasani’s charm contrasted sharply with his degrading and dangerous environment. Her family – Chanel and her husband, Supreme, along with their eight children – lived in one room in Auburn, their clothes and mattresses forming a patchwork jumble on the linoleum floor. The shelter’s fire alarm system was inoperative; the heat cut off in winter; and the family struggled daily with mice and cockroaches. The children swept the bleach bottles from the janitors to clean the shared bathrooms that were not cleaned. Staff did not notify police of the sexual assaults.

Auburn was publicly funded, but neither the public nor the press were allowed in. Andrea Elliott, an investigative reporter for The Times, therefore stationed herself outside the “heavily guarded” shelter, trying to speak to homeless mothers. It was there that she met Chanel, Dasani and the rest of the family. Elliott provided them with a cell phone and video cameras to document their living conditions and eventually snuck into Auburn herself, climbing up an emergency staircase.

The story was an indictment of the city’s shelter system and the Bloomberg administration, under whose watch the number of homeless families had increased by 80%. It was the kind of story you couldn’t shake. That winter everyone was talking about Dasani, who started to be recognized in the streets. Her classmates crowned her “Homeless Child of the Year”. The Times transmitted a wave of donations to the Legal Aid Society, which created a trust for the children, a move that upset Chanel, who did not have access to the funds.

The impact of the story was magnified by the political moment in which it landed. Bloomberg was about to leave and the city’s new mayor, Bill de Blasio, was promising reform. On the first day of 2014, Dasani held a Bible at City Hall as de Blasio’s public lawyer Letitia James was sworn in. James took Dasani’s hand and called her “my new best friend.” This was a long way from the days when Dasani begged for food with Supreme outside a local Pathmark or punched a classmate who called her a “refuge boogie.” “.

So what happened to Dasani? Elliott picks up the story in “Invisible Child,” a book that goes far beyond its original reporting in both its journalistic excellence and depth of insight. Elliott spent eight years working on the book, following Dasani and his family virtually everywhere: in shelters, schools, courts, welfare offices, therapy sessions, parties. You move through different spaces so easily that it’s easy to forget that each new institution has come with its own access barriers that Elliott has managed to overcome. The report has an intimate, almost limitless feel, the first-hand observations supported by some 14,000 pages of official documents, from bulletins to drug tests to city records secured by the demands of the law on the freedom of information. The result of this steadfast and tenacious reporting is a rare and powerful body of work whose stories will live on in you long after you read them.

A few months after de Blasio’s investiture, Dasani, still homeless, was so short of school to care for her younger siblings – even taking them to doctor’s appointments – that she didn’t didn’t know if she would do seventh grade. We had all learned his name, but did it matter? Chanel wondered the same after Eric Garner, who sold Supreme bulk cigarettes, was choked to death by a white policeman on Staten Island. When a story catches fire, we can easily mistake a cultural moment for a concrete policy change, as if we can just bring about a new world. “Whatever power it was to be in The Times,” Elliott writes, “was no match for the power of poverty in Dasani’s life. “

Chanel has been desperately poor for most of her life, as has her mother, who has smoked crack cocaine for years. Chanel herself became addicted to opiates after a doctor prescribed OxyContin after a three-week hospital stay with pulmonary tuberculosis. Supreme soon began to swallow the numbing pills as well. Heroin was her parents’ drug of choice. When he was only 7 years old, Supreme learned to fend for himself, to make “wish” sandwiches by pouring sugar between two slices of bread and wishing for something more. Throughout the book, Chanel and Supreme struggle with addiction and submit to unemployment, but they refuse to visit soup kitchens or apply for disability benefits, for which they and at least two of their children would likely have. been qualified. Many Americans think welfare addiction is widespread among the poor, but research shows the reverse trend – forgoing the government help you need – is much more common.

The family is a picture of chaos and love. When Chanel obtained a housing voucher that subsidized the rent, the family moved into a Staten Island apartment with several bedrooms. But at night, the children drag their mattresses into the living room and sleep as they did in the shelter: like an interlaced heap. Elliott adjusts to family frequency, noticing what teachers and social workers often miss: the secret language of the sisters, the subtle ways Dasani gets in the way of raising his mother. A living scene follows one another, written in the present tense (like the original series). Sometimes this can result in awkward syntax, but overall it works, giving the prose a moral urgency. After all, any of the events in the book could be unfolding right now for countless numbers of American children.

Elliott records echoes through the generations, the phrase “the same” serving as the book’s constant cadence. When Chanel and Supreme go online for a meeting with Child Protective Services, it takes place in the same office where Supreme was treated like a boy. When Dasani’s half-brother is arrested for assaulting a middle-aged woman, he is held in the same police station as Supreme. Chanel remembers the weary, looping rhythms of poverty every time she walks into a homeless shelter and sees a familiar face. “It’s a cycle,” she told Dasani. ” It’s already arrived. It’s just coming back.

But will he come back for Dasani? Her best shot at breaking the cycle comes when she is admitted to Milton Hershey School, a Pennsylvania boarding school for low-income children founded by the chocolate mogul. Leveraging her strong trust, Hershey invests nearly $ 85,000 a year in each of her students, providing them with housing, medical and dental care, clothing and food, as well as a large support staff. In Hershey, Dasani lives in a large house with a dozen other girls and two boys, as well as two house parents, who reassure their children that they no longer need to keep their food on time. dinner.

As Dasani begins to thrive in Hershey, his family in New York begins to fall apart. Dasani makes the track team. Her 7-year-old brother runs away. Her hometown dad in Hershey introduces Dasani to the concept of “code switching”. Child welfare services kick Chanel out of the family home, mainly on suspicion of drug use, and she begins sleeping outside. For tech education, Dasani is editing a movie with his new best friend. Running out of food, Supreme grabs a new roll of paper towels from his apartment, goes to a nearby store, and says to the vendor, “I’m going to kill you if you don’t buy those paper towels.” He is stopped. Social workers send children to three different foster homes.

Dasani blames himself. She lashes out, bleeding a girl’s nose and risking being kicked out. Chanel begs her daughter to graduate from Hershey, where good grades and demeanor are rewarded with a scholarship. “There is no home for you,” says Chanel. “There is no going back.” At Hershey, Dasani lacks nothing but the one thing she values ​​most: her family.

Why all this rarity in a city of excess? Elliott often emphasizes the role of a dysfunctional welfare state. Exhibit A: It took the city four months to transfer the food stamps to Supreme and the kids after Chanel was barred from entering the house, creating the situation that led to her botched theft (if you can even call it that). The past, too, haunts the present. Dasani’s great-grandfather earned three Bronze Service Stars as an auto mechanic during WWII, but after the war ended, racism prevented him from getting a union job or buying a house. The federal government effectively canceled its veteran’s mortgage by redesigning its neighborhood. “The exclusion of African Americans from real estate,” writes Elliott, “laid the foundation for lasting poverty that Dasani would inherit.”

Several other events are recorded without much explanation, in particular episodes of violence. (Why did Chanel hit this shelter social worker in the face? Why did Supreme once hit Chanel?) And beauty – to watch her grow.

“What will we say to the poor Americans, once we see them?” Michael Harrington asked over half a century ago in “The Other America,” a book that helped energize the war on poverty. “I want to tell all well-nourished and optimistic Americans that it is intolerable that so many millions of people are mutilated in body and mind.” What if the next mayor of the city shares this conviction? What if we all do it?

Diljit, Shehnaaz and Sonam shake one leg on latest song ‘Chanel No 5’

I have the impression that at 40 the wheels came off