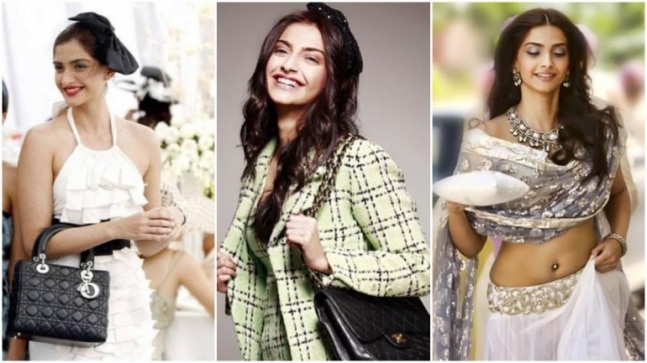 Sleek, eclectic and experimental, Sonam Kapoor’s style ticks all the boxes. Since becoming an actress, Sonam has gained attention for being at the forefront of fashion. She pretty much earned the status of a style icon with her inspiring back-to-back looks. While fashion has always been a big part of Hindi movies, few actresses wore international designers like Chanel or Dior in the movies, until Sonam Kapoor turned things up a bit with Aisha. As the film turns 11 today, August 6, let’s revisit Sonam Kapoor’s exceptional wardrobe from the film.

With her sophisticated style, topped with a headband, Sonam Kapoor gave off a Gossip-Girl vibe in this mint plaid ensemble. According to Sonam, this is her favorite dress from the whole movie. On Aisha’s 6th birthday, the actress opened up pretty much the same on Instagram. â€œThis is from the #Aisha test look! My favorite outfit from the movie! Guys use the # 6yearsofaisha and post your favorite photos or videos from the movie and I could! #sunoaisha (sic), â€she wrote.

The trend for Basque dresses began around the mid-1870s. It reappeared later and remained with various types of modifications. Fashionista Sonam Kapoor wore this bubble gum pink outfit in the movie, and we love it. The peplum dress not only flatters all body types, but it’s also a versatile piece that can be worn to parties or office meetings, just by adding a formal blazer.

Sonam Kapoor wore these gray high waisted pants with a white shirt. The outfit is simple, but of course Sonam knows how to add more glamor to a basic ensemble. She accessorized her look with a long necklace, a chic designer handbag and a pair of striking silver belly shoes. Her side braid and smile completed her look.

A VISION IN WHITE

There are several ultra-chic dresses that Sonam Kapoor has worn throughout the film, but this white Christian Dior mini dress with a bow detail is simply exceptional. The actress made sure to add more drama to it with a Lady Dior Cannage bag. The black stockings, sunglasses and beret made her look like the absolute girl of high society ready to rule the world!

GLAMOR IN A RUFFLED DRESS

Let’s start with the hat. Sonam Kapoor wore different types of headwear in Aisha. We still don’t know if she was inspired by royalties or Gossip Girl’s Blair Waldorf. But anyway, the actress pulled off the hat game in the movie. She teamed her stunning white ruffled dress with mesh sombreros and her Lady Dior Cannage bag. Sonam Kapoor completed the look with a bold red lipstick to turn heads!

Chanel Wilkins leads a revolution from the concha to a woman